The Disney+ television show WandaVision is set to conclude Friday, March 5th, but there are still some questions that audiences want the series to answer. With only half an hour left in the limited series, there is a lot of ground to cover. Some overarching mysteries have been revealed – particularly in the story-heavy episode 8 – but a collection of questions about the genre-bending show still remain.

By the end of episode 8, many topics were settled. Episode 7 implied that Agatha Harkness (Kathryn Hahn) was responsible for the sleepy New Jersey town of Westview transforming into a sitcom, but episode 8 reveals that the phenomenon erupted out of Wanda’s grief upon failing to retrieve Vision’s body from S.W.O.R.D. so she could give him a proper burial. The episode also highlights Wanda’s backstory, including the loss of her parents, her love of classic sitcoms like The Dick Van Dyke Show and I Love Lucy, and Agatha’s theory that Wanda had latent magical abilities before the Mind Stone amplified them. The episode also reveals the fact that S.W.O.R.D. is attempting to rebuild Vision under the direction of Tyler Hayward (Josh Stamberg), and introduces a nickname for Wanda for the first time in the MCU: The Scarlet Witch.

Despite all that is revealed in the penultimate episode, the finale has a hefty task before it. The show has utilized details from both the movies in the MCU and from the comic books to keep audiences gripped to Wanda’s story and the troubles she is facing after Vision’s death. The tone that the show started by lovingly lampooning old sitcoms had become infused with a centuries-old conspiracy including ancient witches, alternate realities, and secret weaponry reconstruction. The show still has a lot to answer for, and for many there is an understandable concern as to whether all of these riddles can be answered within the limited time of the season finale. 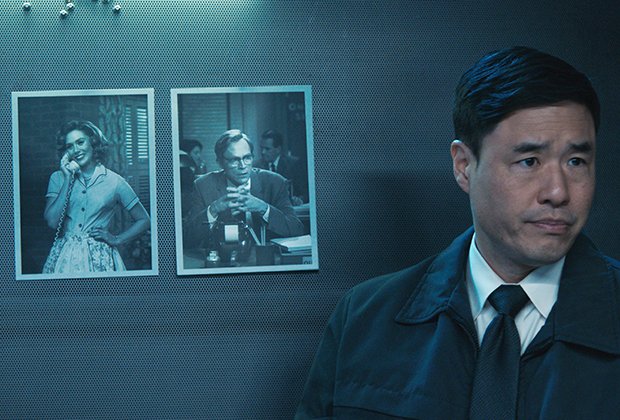 The entire motivation behind FBI agent Jimmy Woo’s (Randall Park) presence in Westview was his search for a missing person. This person was to be a witness, and he is investigating their unusual disappearance. Once Woo is embroiled in the living sitcom plot, the detail of the witness is pushed to the side and hardly mentioned from that point onward. Is one of the unfortunate citizens of the alternate universe the missing witness? There is enough to suggest that one of the Westview locals is the witness in question. There is also a chance that another character from the MCU will show up in the finale, explaining Woo’s original reason for being there. 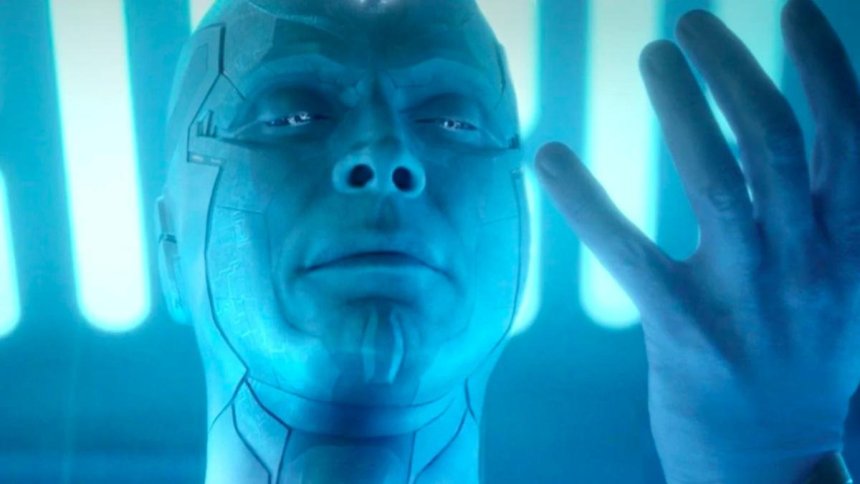 Earlier episodes posited that Wanda retrieved Vision’s body from S.W.O.R.D., but episode 8 revealed that that wasn’t the case. Her powers reconstructed a tangible version of him to live with her in the sitcom world, starting out in black and white on the plot of their future home together. Unlike flesh-and-blood people like Monica Rambeau, Vision is not capable of breaking free of the energy barrier around the town. When he walked through The Hex, he was pulled apart until Wanda extended the size of the alternate realm.

The post-credits scene in episode 8 revealed that S.W.O.R.D. is indeed reconstructing Vision in part by utilizing Wanda’s spell via a drone sent into Westview. This version of Vision could very well be White Vision, a character introduced in West Coast Avengers comics. Unfortunately, White Vision does not have emotions or empathy, so it is likely he won’t be the man that Wanda fell in love with. That said, there is a possibility that the two Visions could somehow merge to bring the original Vision back to life, giving Wanda a happy ending.

What would happen to the twin boys?

There is a question as to whether Wanda’s twin boys will cease to exist if and when The Hex is disbanded. Episode 8 saw Agatha expending energy kidnapping the children to compel Wanda to reveal the trauma that brought her to this point. Wanda’s feelings for her children are very real despite their unusual conception, pregnancy, and aging process. The nature of these characters from the Marvel Comics are initially artificial creations made by the Scarlet Witch, so there is a good chance Tommy and Billy will not be allowed to move on out of the sitcom realm.

Is Haywards on the Up-And-Up?

There seems to be something awry with S.W.O.R.D. director Tyler Hayward. He obviously has a desire to utilize Vision’s body for parts, and allowed Wanda to enter the facility possibly to piggy-back off of her powers and what her grief for Vision will bring about. His work for the government agency is to keep tabs on sentient weapons like Vision, but it seems like that is not his only motivation. He tells Monica Rambeau that her mother wanted to keep her “grounded,” but this could very well be a lie. He may have his own treacherous motivations or even a secret identity.

Fan speculation has centered on his nebulous characterization, which doesn’t seem altogether trustworthy. His use of Wanda’s magic to create White Vision is unseemly and underhanded, and it almost appears as though he planted the idea for the perfect universe wherein she and Vision can play out their marriage in the powerful witch’s mind.

What’s up with Dottie? 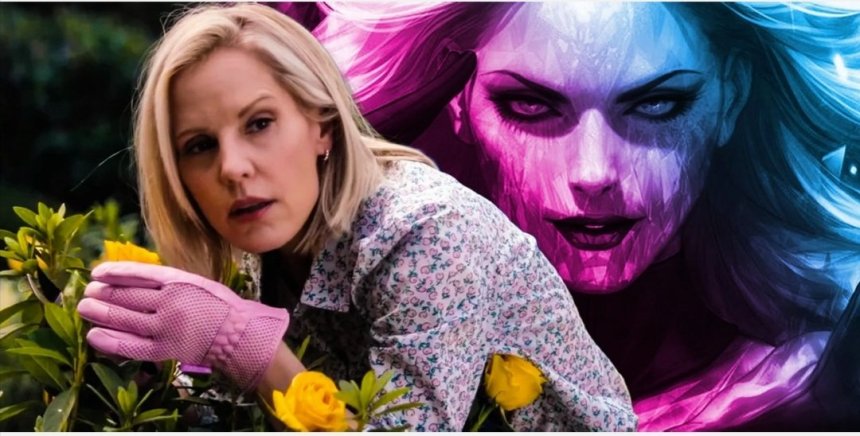 Unlike the other denizens of Westview, Dottie Jones (Emma Caulfield Ford), does not seem to cotton to Wanda and Vision, instead looking on them suspiciously with a heaping dose of side-eye. She says to Wanda, “I’ve heard things about you. You and your husband,” and seems wary of the strange events surrounding Wanda during town events. She is also spotted spying on Wanda’s family from her tulip bed, signifying that she still isn’t satisfied with Wanda’s personality or explanations. S.W.O.R.D. could not find a real-world identity for Dottie, as if she doesn’t actually exist.
Many have pointed to her flowers as a clue. Where Wanda’s flowers are pink and red like her powers and Agatha has purple flowers in her yard just like her magic, the yellow flowers in Dottie’s yard may point to her being Arcanna Jones from Squadron Supreme. The character is also known as Moonglow, and her powers manifest as the color yellow. In a series rife with Easter Eggs and connections, this seems a highly probable scenario.

Where did Agatha come from? 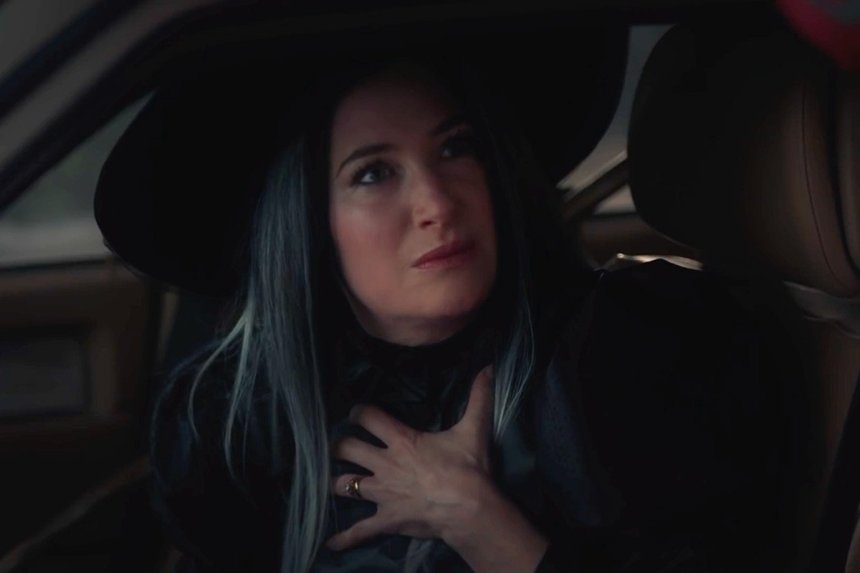 The revelation that Vision bought a plot of land in Westview for he and Wanda to settle down together points to some other answers, including the reality of the town’s residents like Mrs. Hart (Debra Jo Rupp) and Herb (David Payton). But does this mean that Agatha Harkness already lived there? There may have been something preordained about the location Vision selected to be their forever home. Agatha may have had her own motivations for meeting the Scarlet Witch,drawing her romantic partner to the seemingly random location in New Jersey in order for Wanda to display her powers under Agatha’s watchful eye. Whether a purposeful move or a coincidence, this is a riddle in need of some explanation.

Patty Nece hasn’t been inside a retail store for an entire year. Even though most Virginia businesses reopened by July and grocery stores remained opened throughout the pandemic, the 62-year-old hasn’t dared to step inside one since last March, as her obesity puts her at risk for severe COVID-19. Because of her disease, she’s eligible […]

Senate Democrats passed their version of the near- $1.9 trillion American Rescue Plan Act Saturday afternoon, but not before making some major changes from the version of the bill passed by the House of Representative last week. Some of the most notable changes between the two relief bills include dropping a provision to gradually increase […]

Senate Democrats are moving ahead with an updated version of the $1.9 trillion coronavirus relief package that includes several tweaks intended to satisfy some moderates ahead of an expected final vote in the coming days. The Senate voted 51-50 along party lines to advance the bill on Thursday. Vice President Harris voted with all Democrats […]

[Full Story] Why are fans trending “Proud of Louis” on twitter? – Defenceless

One Direction fans have always been known to be a passionate and loud group of supporters. They’ve shown up in incredible ways for band members Louis Tomlinson, Harry Styles, Liam Payne, Niall Horan, and former member Zayn Malik in the the band’s 10 years of existence. The fans’ latest feat has been a beautiful way […]

In late November, an urgent email popped up in the inbox of Hindustan Syringes & Medical Devices, one of the world’s largest syringe makers. It was from UNICEF, the United Nations agency for children, and it was desperately seeking syringes. Not just any would do. These syringes must be smaller than usual. They had to […]

At least 19 Myanmar police officers have crossed the border into India in the latest sign of growing dissent within the security forces and civil service officials who are opposed to the military coup. The first reported case of police fleeing the country came as one of the country’s top diplomats resigned from his post […]

“People should be worried about natural mutations of Covid-19” says Dr. Kavita Patel

Thanks to natural mutations, more-infectious and potentially deadlier variants of the virus that causes COVID-19 are now racing around the globe and are threatening to turn back the recent progress against the disease due to vaccination. Last week Houston became the first big American city to report the presence of all five variants that have […]

At least a dozen people and possibly up to 23 have been killed in Iran’s Sistan-Baluchistan province where Revolutionary Guards and security forces have used lethal force against fuel couriers from ethnic minorities and protesters, the United Nations said on Friday. Iran is investigating an incident in which at least two Iranians were shot dead […]

Police in the northern Indian state of Uttar Pradesh have arrested a man suspected of beheading his daughter. Sarvesh Kumar was arrested as he walked towards a police station carrying the severed head of the 17-year-old girl. In a video shot by the police, he is heard saying that he was angered by his daughter’s […]

#WhatsHappeningInMyanmar – Womens on the front line

Ma Kyal Sin loved taekwondo, spicy food and a good red lipstick. She adopted the English name Angel, and her father hugged her goodbye when she went out on the streets of Mandalay, in central Myanmar, to join the crowds peacefully protesting the recent seizure of power by the military. The black T-shirt that Kyal […]

Patty Nece hasn’t been inside a retail store for an entire year. Even though most Virginia businesses reopened by July and grocery stores remained opened